In 40 matches over more than 100 years Saturday was only the British and Irish Lions’ seventh win over the New Zealand All Blacks. It was the first since 1993. Prior to that the previous victory over the New Zealanders was back in 1977. So Lions wins over the All Blacks are pretty rare. Just as rare are All Blacks defeats in New Zealand. This loss in the Westpac stadium was the first defeat on home soil since 2009. It was also the first defeat in Wellington since 2003. Historical records are made to be broken but it was a tough ask. It was made a little easier for the Lions however.

The big turning point was of course Sonny Bill Williams’ sending off. You’d like to think that in any era of rugby union his deliberate shot to the jaw of Anthony Watson would be a red card offence. But in today’s game, with the laws tightened this season to crack down and protect players, Garces had no option whatsoever. Even the most one-eyed Kiwi had to acknowledge that under the laws it had to be a dismissal from the field of play. For additional context this was the first red card given to an All Black in fifty years, only the third in history and the first on New Zealand soil ever. Such is the rarity of the event that the Lions had clearly not planned for it. As a result, they seemed rocked by the sudden tag of favourites. 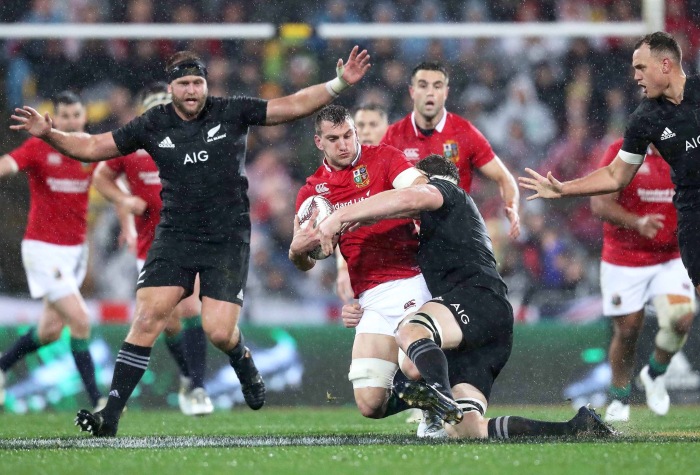 After halftime the Lions did practically everything they could to hand the game to the Kiwis. The one man advantage seemed to plague them with a string of rash decisions and indiscipline. Mako Vunipola gave away four penalties alone. His yellow card could’ve been very costly too. Mercifully Beauden Barrett missed three kicks at goal which kept the Lions in striking distance. Had he kick them, the All Blacks would’ve been out of sight on the scoreboard. Instead the Lions responded not once but twice. 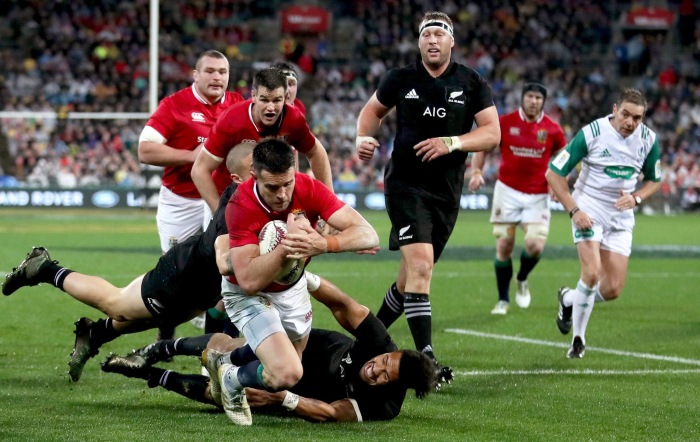 Tries beat the All Blacks

It has been said all tour that to beat the All Blacks you have to score tries against them. Even in the poor conditions of a Wellington winter the Lions managed to score two exceptionally well crafted tries. These were needed because the Lions had allowed the All Blacks to build a decent lead. But when it really counted players’ handling was spot on. The finishing was also clinical, first from Taulepe Faletau and then by Connor Murray. When composure was required the players in red delivered. Whilst the Lions scored two tries they crucially managed to keep the All Blacks out from crossing the tryline.

Certain changes in the starting fifteen were designed to win the collisions, particularly on the gainline. The back row, particularly O’Brien and Warburton combined well to make their tackles. Itoje and Alun Wyn Jones put in big hits, stopping the men in black from gaining momentum and yards which they had managed with ease seven days previously. It was a colossal effort. With Sonny Bill Williams off the All Blacks’ tactics changed somewhat. They themselves reverted to a ‘Warrenball’ style. Heroically the red defensive line held firm. A fluke occurrence of poor pass and a tackle in the air alllowed the Lions to sneak ahead and see the game out. Massive credit to Owen Farrell for slotting the vital penalty too. It levels the series up at 1-1 with a return to Eden Park in Auckland to decide the Test series.

The Lions have proved that they can beat the All Blacks. Sometimes professional sport is just about belief. Momentum too. Both will now be on the side of the Lions. It was refreshing to hear Sam Warburton say the job was only half done following the final whistle. This is a player who has never beaten New Zealand and yet his first thoughts were of repeating the result next week. That is a real leader. All of these players will realise that an opportunity to become immortal legends has been earned. They’ve proved to themselves they can win. They’ve shown that they can score tries. If the British and Irish Lions players put in the performance of their lives once again then maybe, just maybe, the impossible can become reality.

The All Blacks will be a very different proposition next week. They might even keep fifteen players on the field. But they will also be under pressure and how they cope with that pressure will be a deciding factor. Ultimately the All Blacks wanted a competitive test series and a challenge. They’ve sure as hell got one now!