Skip to content
HomeREVIEW: Rogue One: A Star Wars Story 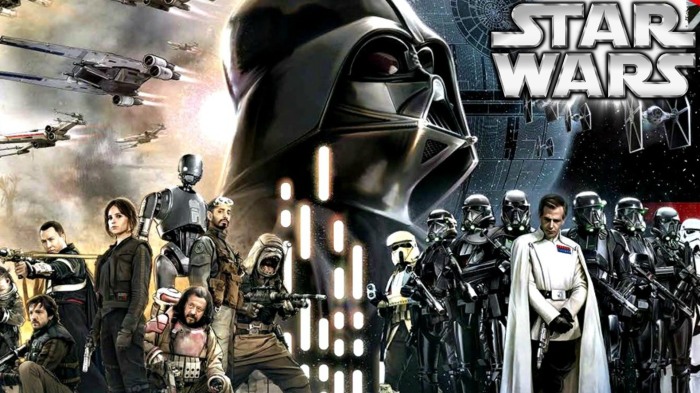 Rogue One: A Star Wars Story

One of my biggest gripes about Batman Vs Superman was the movie’s very existence. I questioned what the point of it was. Rogue One however is the complete reverse. The fact that it has been created is extraordinary. It is a film that explains an important plot point in a different movie that was premiered forty years ago now. It didn’t need to be made. The Star Wars saga existed comfortably before and after Rogue One was released. But yet it provides an engaging, thoroughly enjoyable and visually impressive Star Wars film that comfortably sits alongside those which have come before and those still to follow.

Spoiler Warning! Details will be discussed that will hamper viewer enjoyment for those yet not to see it.

Unlike other simplistic ‘cash-in’ movies within franchises, incredible thought and effort has gone into delivering Rogue One. For instance, I was astonished that Peter Cushing was in it. And in it a lot! So much so that I doubted he was actually dead. Post cinema visit I had to check and yes the legendary actor, who also played Doctor Who on the big screen, passed away in 1994. There are also a number of other cameos. One is delightfully amusing and brief. Another is chilling and full of grandeur. In fact all of the sequences featuring Darth Vader are very impressive, from the horrific realities of his injuries to an astonishing ass kicking rampage which will make a whole new generation fear him. The final surprise appearance however is utterly heartbreaking given recent news but did distract me from the slightly dodgy rendering to achieve the effect of youthfulness. None of these cameos overshadow the piece and just added to the ‘this is for you fans’ joyousness.

Overall, Rogue One is a bit bland compared to other entires in the Star Wars mythos. This is largely because the audience is obviously less invested in newer characters that are introduced for this movie. However all of these individuals are delivered well. They are unique and have suitable personalities that carry the viewer along with the story. Felicity Jones and Diego Luna were both excellent and actually the fact that they were new characters allowed for the unexpected moment when they were actually killed off. This twist added a refreshing change for Star Wars and particularly for a Disney movie!

Rogue One also finally brought the ‘war’ element to Star Wars. In addition to the spectacularly well delivered battle sequences and the fighting on the beaches, the film also creates the scale of a universal conflict. This made the planet hopping of the first act less tedious and more necessary. Another interesting direction saw the rebels presented as not simple moral crusaders. Instead it is alluded to some of the more horrific acts of being at war that these fighters have had to do. The reality of lead characters not making it out alive against the impossible odds also made for a welcome change. Sacrifices being made in this movie also made you appreciate the small battles that need to be traversed for later, more memorable victories. Time to dig out ‘A New Hope’ I think!