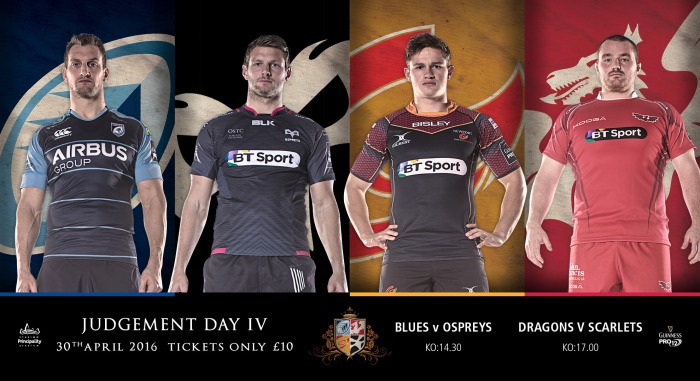 Today, Saturday 30th April, the Principality Stadium in Cardiff once again hosts the fourth annual Judgement Day event with all four Welsh regions coming together for a doubleheader of rugby action. With nearly 70,000 tickets sold it is likely to be hailed as a big success. However, if regional rugby is going to grow and capture the imagination of the Welsh people this event is not the way to achieve it.

In theory 70,000 fans equally divided between the four regions would equate to a fan base of 17,500 people. Getting that number to regularly turn out at the Liberty stadium or Arms Park is a completely unrealistic expectation. This is because the ‘fair weather’ supporters happy to attend the festivities of a Saturday in Cardiff have little interest in following the rugby on a regular basis. If they did attendances at regional grounds would be regular sell outs. Crucial to growing attendances and building local support of regional rugby is to appeal to those most passionate about Welsh rugby, those who support their local club. However, the scheduling of Judgement Day forces those supporters to make a choice to determine which team their priorities lie with. Perhaps typical of the WRU, the regional game is elevated as the most important in the country, belittling all beneath it. With a message like that from the governing body it is no wonder grass roots rugby is struggling to attract players and supporters.

The Ospreys and Cardiff Blues match kicked off at 2.30pm, clashing with grass roots fixtures all across the country. Whilst Sam Warburton ran out for the Blues his local club Rhiwbina had fixtures for all three of their senior teams. In Ospreylia Glynneath were lining up a fixture with Bridgend Athletic, whilst remaining in the Championship Bargoed had a huge clash with historic club Pontypool. At youth level both Merthyr and Pontypridd had matches scheduled so any potential appeals to entice those young players to back the Blues with a Judgement Day showcase was wasted. This just goes to demonstrate that those with a consistent record of supporting Welsh rugby; players, officials, supporters and referees who all sacrifice their spare time for a love of the game, are being robbed of a chance to support the professional games biggest day.

Although there were a number of grassroots fixtures across the country on Saturday, Judgement Day was scheduled for a free weekend, learning from previous years when more clashes prevented fans from attending. These games were largely rearrangements given the poor winter weather and is evidence perhaps that this appropriate scheduling may have contributed to the attendance increase of over 15,000 people from 2015.

Whilst an argument can be made that Judgement Day has the potential to grow the rugby going audience the scheduling of the event must not rob Welsh rugbys most fervent supporters of the opportunity to see their region at the National stadium. Sadly the likelihood is that those attending Judgement Day will have their enthusiasm muted by overly crowded trains, undoing the good work that our best rugby players deliver on the pitch anyway. As a result the regions will continue to fail to attract significant fans to their stadiums for home matches, which their Irish rivals achieve on a weekly basis, and clubs at the grassroots level will also struggle to attract players and supporters. Instead of causing conflict and a divide between the professional and amateur games, the two have to unite for both to stand a chance of survival and prosperity.