I’ve decided to revisit some of the lost episodes from Doctor Who’s history which no longer exist in the archives by using the original audio recordings which have been remastered and released onto CD. It is also possible to find some very good reconstructions on the internet using images taken from the broadcast. Fortunately on this occasion we still have episodes 2 and 5 to enjoy plus some addition clips, such as (spoiler warning) Katarina’s death which was shown on Blue Peter, a programme which was archived properly.

Given the epic length of The Dalek’s Master Plan I have decided to review it in stages starting with the first half of the story. Following on from the conclusion of ‘The Myth Makers’ the TARDIS lands on the planet location seen in ‘Mission to the Unknown’, Kembel. Also on Kembel are two Space Security Agents Bret Vyon and Kurt Gantry, the latter being killed by a Dalek in a scene which does still exist on film. Bret Vyon appeals to fans immediately because he is played by Nicholas Courtney who would later return to the series as Brigadier Alistair Gordon Lethbridge-Stewart and fortunately he manages to help Steven recover from the wounds inflicted in Troy. We are introduced to the character of Mavic Chen, Guardian of the Solar System and (spoiler) the shocking twist is that he is actually in league with the Daleks and provides the crucial Taranium core needed for their great weapon, the Time Destructor. From that moment on the plot becomes all about the Taranium core, so much so episodes 3-6 might as well be retitled ‘The Quest for Taranium’. During that chase across space Katarina sacrifices herself for the Doctor, Steven and Bret. It happens suddenly and the remaining three actors are suitably solemn and stunned, resonating to the audience. Sadly Katarina only appears in a total of 5 episodes, her character struggling with what a key is for example, so it is no wonder that she was written out so quickly. However the second Doctor, Patrick Troughton, would get a companion from the past in Jamie McCrimmon, his inquisitive questioning caused by his inexperience enlightening the viewer and proving a historical companion could be succesful. The Taranium core still remains a plot point however moving forward into the second half of the story so perhaps Katarina’s sacrifice has merely postponed the inevitable, the Daleks recapturing it once again. 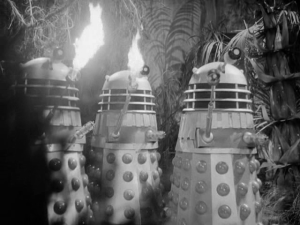 A particular highlight is the scene of the Daleks burning down the forest of Kembel, there is something very beautiful about a Dalek with a flame thrower, even in black and white, and it surprises me that it has not been replicated more frequently.

Later we are introduced to Sara (sometimes pronounced Sara but also Sarah) Kingdom, who reveals herself to be Bret Vyon’s sister, after killing him, which seems strangely tacked on but does allow Jean Marsh to demonstrate her acting skills, conveying genuine remorse. Sara takes a bit of convincing that Mavic Chen should not be trusted and with good reason, Kevin Stoney is incredibly charismatic in the role. Although the character is a stereotypical power-hungry villain, Stoney manoeuvres seamlessly from incandessant rage to seductive charm, elevating him above that of a cliched scoundrel to that of one of the most memorable guest star appearances in Doctor Who’s history.

Next up is episode 7 ‘The Feast of Steven’ which I shall review separately for reasons which will become soon obvious.